The Diagnosis. Even if you know what's coming, you're never prepared for how it feels. 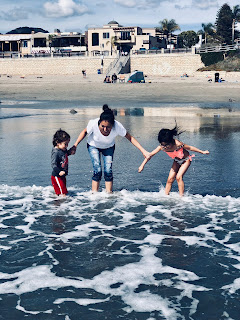 After many times of pressing delete over and over again on the keyboard I decided it is time. Time to tell it all, to go back to the dark days in my life where everything was gray and time stood still for multiple days, weeks, and months. The diagnosis. I do not recall the exact date, I have chosen to erased it out of my mind completely. I just know that it was the year 2016, after Emmett’s second birthday. We did not celebrate Emmett’s second birthday that year because we were so caught up in our grief. I told myself that it was ok, since Emmett didn’t like being around people, and no one understood what we were going through. I recall the constant late nights of research, and tears that I shed every night. As I looked at all of those countless articles, my heart kept breaking into little pieces. I told myself I was crazy, and that I was overacting, but not once did I believe myself. I waited anxiously for every appointment with many different specialists.
Emmett’s firsts pediatrician completely ignored all my concerns and made me feel like a crazy psychotic overreacting parent. After Emmett’s fourth visit with him,  I left crying out of his office.I was so frustrated because he refuse to accept any of my concerns. Later,I moved on and found this amazing nurse practitioner that quickly took all of my concerns and referred him very quickly. I also contacted my local CVRC and made a referral with them myself. They quickly came and before we knew it, we had began Early Intervention. Some specialists told me I was overacting to give him time. Some said it was autism, he’s delayed, or just wait until he’s older.  One neurologist in particular changed our lives. He was the third neurologists that I had seen. He took one glance at Emmett and  said “ Look, I don’t know what is going on with Emmett, but what I do know is  that there is something there. I will referred you to a geneticists, maybe he can help you, if he doesn't figure it out, come back and we will figure it out”. I knew at that point that in fact I was not overacting and that I should not second guess myself.I went to my pediatrician and immediately asked to be referred at out as soon as possible. Our first visit to the geneticist was amazing. He evaluated Emmett and asked about a million questions. He took all of my concerns into consideration, and then he order blood work.
I took Emmett to get the blood work done and I decided I to take a picture of his blood order form. I researched what he had been tested for and to see if I could figure it out while waiting for results. Getting the results took about 3 months. So I looked at the sheet and I googled every single one of them. They were about 10 different genetic disorders he was being tested for. After I came across Fragile X Syndrome I quickly knew that was what Emmett had and the more I researched, the more it appeared that fit all symptoms and characteristics. I researched every corner of the internet until I saw every single article and video on Fragile X syndrome. The day I was supposed to get the results they didn't have them. They had lost Emmett’s blood sample for Fragile X, but the geneticist reassured me that he had tested negative for all the other syndromes. So he ordered another lab order and once again we went to get more blood work. I begged the geneticists to please let me know as soon as he got the results, that I wasn’t going to wait months like the last time. Four days later he called and asked that we come in to see him, and to bring my fiancé Juan Emmett’s Dad with me. I knew that he had tested positive, but my heart still had high hopes, and  that I was being the overacting mom like everyone said I was.
As we waited in the waiting room for nearly an hour, it felt like eternity. Juan and I stared at each other, reassuring ourselves that is was going to be ok. We were both dead tired and feeling extremely scared. I made a list of questions to ask the geneticists  in both scenarios if he did or didn’t have it. 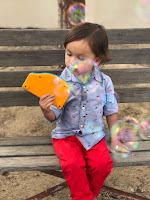 I recall blowing bubbles for Emmett while we where waiting and holding back tears trying to hold my composure. As he walked in with an intern and another pediatrician, he began to explain what fragile X syndrome was and how if effects your chromosomes, what a carrier full mutation and premutation meant. He paused and said “Emmett has the Fragile X Syndrome  Full Mutation”. He politely asked if we were ok and Juan quickly jumped in and started to ask questions from our list meanwhile I was picking up the pieces from my heart that was shattering in a million pieces on the floor. Meanwhile the geneticist recommended me to get tested for Fragile X Carrier , and then he recommended that my daughter get tested as well. We both managed to hold our tears and our composure until we walked out of the exit door. After that there was nothing but tears the whole way home and the days after. I have to admit, we could probably fill up a whole lake with the amount of tears that I shed that day. Finally the wait was over, and although the outcome was more than I could handle at the time there was a sight of relief that lifted off of me for a few moments. I had my answer to all my concerns with my son, and I wanted to feel completely relieved,but I couldn’t because now I had to wait and see if my daughter was going to test positive for Fragile X Syndrome, and live with the guilt of being a fragile X carrier and passing on Fragile X to my kids! 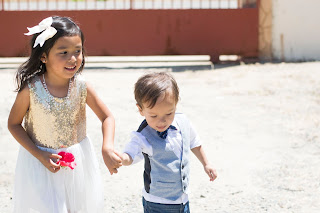 More information on Fragile X Syndrome can be found at https://fragilex.org/understanding-fragile-x/fragile-x-syndrome/ 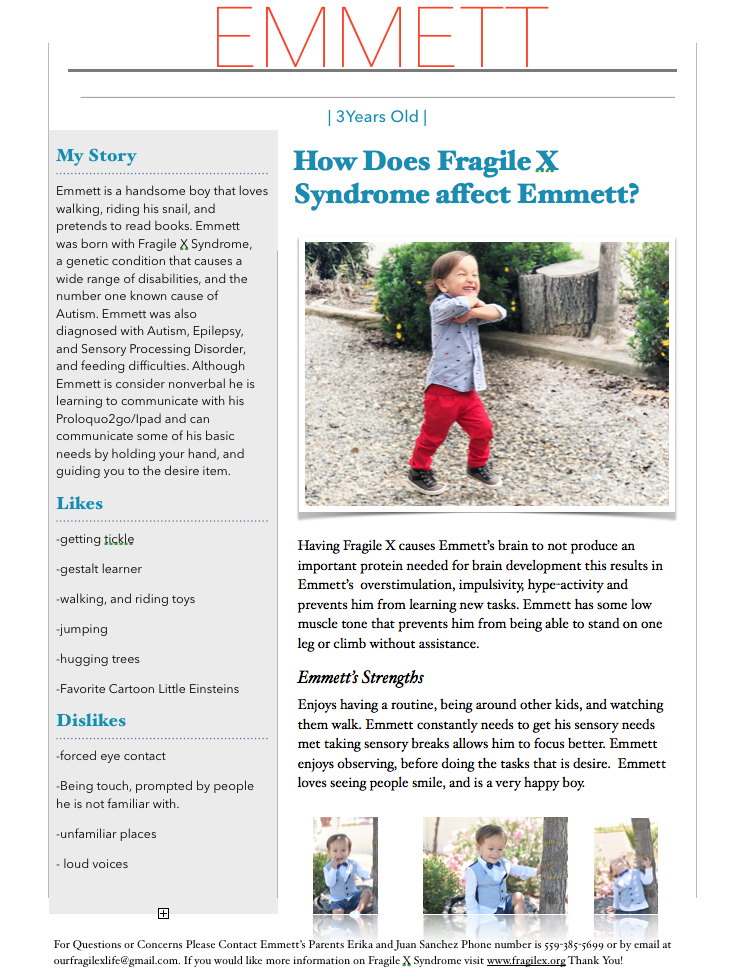